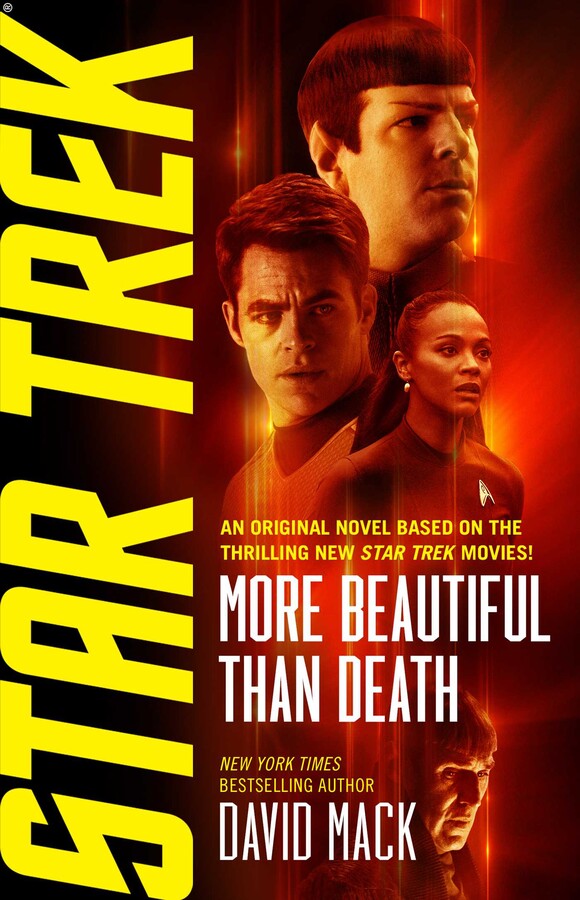 Prepare to once again dive into the alternate timeline version of the Star Trek universe, known as the Kelvin timeline, in this latest exciting tie-in novel from acclaimed author David Mack, Star Trek: More Beautiful Than Death.

Set shortly after the events of the 2009 Star Trek film, in which the planet of Vulcan was destroyed by the mad Romulan Nero, Captain James T. Kirk is now captain of USS Enterprise.  Given a new mission, the Enterprise and its crew are ordered to rendezvous with Spock’s father, Ambassador Sarek, and escort him to the planet of Akiron.  Akiron, a resource-rich world containing a substantial amount of dilithium, has recently sent out a distress signal to the Federation, who are hoping to exchange aid for favourable trading rights.

Arriving at Akiron, they find the planet in a state of chaos as the population are under attack by demonic dark-energy creatures, known as wights, who strike from the darkness, eat energy, and appear to suck the life right out of any living being.  Determined to save the people of Akiron no matter what, Kirk begins his preparations to investigate the wights.  However, before he can act, Sarek orders Kirk to abandon the mission and leave Akiron.

Refusing to obey Sarek’s orders, Kirk attempts to find the cause of the terrible events on Akiron and save who he can.  With the help of an old mystic who believes that Kirk has faced the wights in his prior lives the Enterprise crew are soon able to discover the source of the wights on Akiron and the deadly potential their invasion has.  As Kirk and his crew attempt to save the entirety of the planet they must overcome several deadly attacks as well as the sinister agenda of Sarek’s Vulcan aide, L’Nel, who hatches a dangerous personal plan to kill Spock.  Can the Kirk and the Enterprise succeed, or will darkness engulf everything it touches?

Over the last couple of years, I have had a great pleasure of reading/listening to several amazing pieces of Star Trek fiction and I always love seeing the unique and varied tales that the talented team of tie-in authors can come up with.  More Beautiful Than Death is an excellent example of this as it features a fantastic and captivating tale of exploration and desperation within an interesting part of the Star Trek canon.  This latest novel is written by a true veteran of Star Trek fiction, David Mack, who has not only written a ton of different tie-in novels but who also has writing credits for two episodes of Star Trek: Deep Space Nine.  More Beautiful Than Death is set in the alternate timeline introduced in the 2009 film Star Trek, known as the Kelvin timeline.  This is the second Kelvin timeline novel I have read this year after previously enjoying The Unsettling Stars, and it set between the events of Star Trek and Star Trek: Into Darkness.  More Beautiful Than Death ended up being an impressive and exciting Star Trek novel, and I had an amazing time listening to it.

Mack has come up with an excellent narrative for More Beautiful Than Death which sees the crew of this alternate timeline Enterprise attempt to defend an alien planet from a series of demonic creatures.  The author writes this much like an episode of a Star Trek series, with the crew arriving at the planet, analysing the situation, facing all manner of conflicts, getting beat up and then engaging in a course of action to save the day.  I felt that this worked extremely well for the novel and readers are treated to a captivating and dramatic science fiction story that easily keeps the attention from start to finish.  The stakes are high throughout More Beautiful Than Death, and Mack keeps the tension and excitement going through much of the book, focusing both on the mission at hand and on the contentious personalities aboard the ship.  There are a number awesome action-packed sequences throughout the book, and I especially enjoyed the various scenes that showed the Enterprise being attacked by the wights, forcing the crew to flee from an opponent they cannot even touch.  There is also a particularly good subplot around the Vulcan characters aboard the Enterprise, with the mysterious character of L’Nel apparently plotting to kill Spock.  I really enjoyed the way that Mack explored this subplot, showing L’Nel’s attack on Spock as a prelude to the rest of the book, and then slowly exploring the events that led up to it in the main story.  This subplot combined with the main narrative extremely well and the result is a deeply compelling overall novel that I had an amazing time listening to.

Like many Star Trek tie-in novels, More Beautiful Than Death is best enjoyed by those readers who have some familiarity with the franchise.  However, I felt that Mack made his latest book extremely accessible to new readers, and anyone can have a great time enjoying the fast-paced and intriguing novel with minimal knowledge of Star Trek lore.  There are a lot of fun Star Trek elements associated with this novel, and I really enjoyed the author’s intriguing additions to the canon.  Not only does this book serve as an excellent follow-up to the 2009 movie, showing the early missions of this younger Enterprise crew, but Mack also utilises the alternate timeline setting of this novel to come up with clever alterations to the classic Star Trek lore.  One part of the book’s narrative ends up being an extremely ingenious homage to a key episode of The Original Series.  Mack cleverly inserts this compelling altered version of this episode throughout the book, and it was deeply fascinating to see it unfold, especially as the events of the Star Trek film have ensured it is sufficiently different.  This revision of a classic Star Trek episode was extremely impressive and it was one of my favourite parts of the entire book.  All of this makes for an amazing Star Trek read, and fans of the franchise are in for a real treat with this book.

In addition to some cool call-backs to The Original Series, Mack also does an exceptional job bringing the Kelvin timeline versions of the Enterprise crew to life.  The author ensures that all of the main characters in this book are portrayed slightly differently to how they are in The Original Series.  For example, Kirk is a lot more impulsive, younger and combative than the classic version.  Spock is a little stiffer, as he has only been influenced by Kirk a short while.  Uhura is a lot more combative and emotional, mainly due to her relationship with Spock.  Scotty is a lot more humorous, channelling his inner Simon Pegg, while McCoy is a lot gruffer and even more reluctant to get involved in the usual crazy Enterprise adventures (if that was possible).  All this makes for a tie-in novel that is a lot more in line with the newer generation of films and I personally appreciated the effort from the author.  I was tad disappointed that Sulu and Chekhov were not featured as heavily as the other major characters in the novel (something I have noticed in other Star Trek tie-in novels), but this was still a great novel for Star Trek characters.

I also appreciated how Mack takes the time to explore the psyches of several of his major characters, especially as it produces some compelling and dramatic results.  This includes a deep dive into this version of Captain Kirk, such as exploring his mental state after the events of the 2009 film, with a particular focus on the guilt and hopelessness he felt over watching the destruction of Vulcan, which has made him more determined to save entire worlds.  There is also an intriguing inclusion about Kirk’s past lives, with a couple featured as part of the plot.  This leads into some great discussion about how the character is destined to be thrust into great and tumultuous events, which I quite enjoyed.  Spock also gets a major focus in More Beautiful Than Death, thanks to the author’s inclusion of other Vulcan characters like Sarek and L’Nel.  Spock’s complicated relationship with his father and other Vulcans is a major theme throughout the novel, and aspects of his life aboard the Enterprise, particularly Spock’s romantic attachment to Uhura and his loyalty to Kirk, increase the tension.  This adds an excellent amount of drama to the narrative and it plays extremely well into the clever subplot around L’Nel, resulting in an intriguing and compelling narrative arc.  I had a great time diving down into several of these characters, and it helped to produce a much more complete and emotionally driven narrative.

As I do with most Star Trek books, I ended up checking out More Beautiful Than Death in its audiobook format rather than getting a physical copy.  The More Beautiful Than Death audiobook has a run-time of just over eight hours, making it an extremely easy audiobook to get through quickly.  I had an amazing time listening to this audiobook, especially as it features the vocal talents of the outstanding Robert Petkoff.  I have mentioned Petkoff before in several my reviews as he is the go-to narrator for any piece of Star Trek fiction that gains an audiobook format, due to his fantastic ability to perfectly replicate the cast members of both The Original Series and The Next Generation television shows.  Petkoff did another exceptional job in More Beautiful Than Death, expertly bringing every key member of the Enterprise’s crew to life and providing fantastic voices for each of them.  While they do sound more like The Original Series cast than the actors from the 2009 Star Trek film, this was still excellent work from Petkoff, and listeners are well aware which character is speaking at every point in the audiobook.  I also liked the voices that Petkoff utilised for the various supporting characters in More Beautiful Than Death, and there are some great differentiation in tones between the various alien species, such as for the Vulcan characters Sarek and L’Nel.  All of this makes for an epic listen, and Star Trek fans are strongly advised to check out More Beautiful Than Death in its audiobook format.

With his latest novel, David Mack continues to explore and add to the Star Trek expanded universe, this time diving into the intriguing Kelvin timeline.  More Beautiful Than Death is an excellent and entertaining read that takes the reader on a gripping adventure in space.  Thanks to the author’s excellent use of characters, Star Trek elements and his fantastic and unique narrative, More Beautiful Than Death is a fantastic Star Trek tie-in novel which will really appeal to established fans of this franchise.  Highly recommended.

One thought on “Star Trek: More Beautiful Than Death by David Mack” 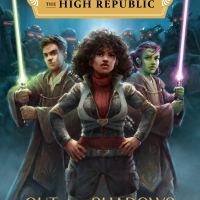