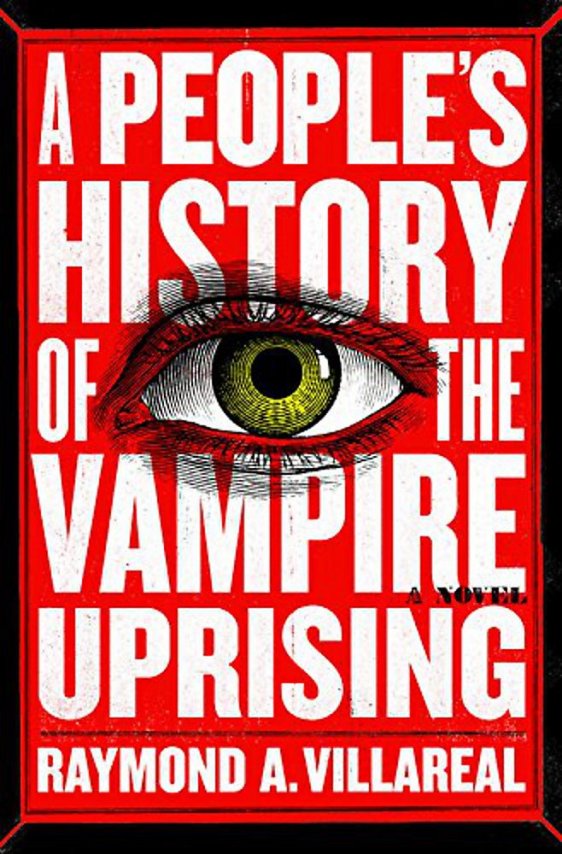 From the inspired mind of Raymond Villareal comes one of the most captivating and thought-provoking literary achievements of 2018.  Have you ever wondered what would happen if vampires came into existence in the modern world?  Villareal’s debut novel, A People’s History of the Vampire Uprising, explores the possibility of such an event through a comprehensive fictional oral history, much like Max Brooks’ observation of a zombie apocalypse in World War Z.

The body of a young woman in an Arizona morgue awakens and disappears into the night.  This mysterious event will start a chain reaction around the world that no one could predict.  The CDC investigator consulting on the case soon discovers that the woman was suffering from a mysterious disease with several incredible symptoms.  Subjects are stronger, faster, suffer a violent reaction to sunlight, have unnaturally long lives and are utterly enthralling to humans.  More importantly, they must consume blood to survive and can pass the disease on by biting another human.  As attempts to quarantine the disease fail and additional bodies start disappearing, the world quickly realises that vampires are real and here to stay.

As more and more people are infected, many of those who have been turned begin to reintegrate back into society.  These new creatures call themselves ‘gloamings’, finding the term ‘vampires’ to be derogatory.  Soon, many of the rich and famous are flocking to the gloamings, hoping to join their ranks and be re-created.  With their natural talents enhanced, the gloamings start accumulating significant wealth, power and influence as they infiltrate all levels of human society while attracting followers to their side.  Gloamings infiltrate the government, powerful companies and the Catholic Church.  One gloaming even begins a run for high political office.

However, not everyone is enamoured by the gloamings.  A faction of the church is determined to stop the vampire incursion and has formed its own militia to fight gloamings throughout the world.  Following a series of high profile cases, the FBI starts a taskforce focusing on crimes by gloamings.  The original CDC investigator continues her research into the virus despite intense political and social pressure to stop.  In New Mexico, a skilled political motivator soon discovers a terrible secret about his employers.  This is the start of the vampire uprising; the world will never be the same.

Written in the format of a history book, A People’s History of the Vampire Uprising is an epistolary novel that uses a series of fictional documents and testimonials to tell the story.  Villareal presents a large portion of the story within chapters representing testimonials from certain characters specifically taken for a history book.  Other chapters are written in the format of important documents from the fictional world and are made to represent interrogation notes, congressional transcripts, government reports and articles in scientific and legal journals.  In addition to these longer chapters, Villareal has also included numerous shorter entries that are presented as news stories, public interest articles, transcripts pulled from popular media sites, emails and the comments section of a message board.  As a result of all these different formats and documents types, A People’s History of the Vampire Uprising has the uncanny feel of an actual history book, which is further reinforced by the inclusion of footnotes in most of the longer chapters, and three short appendices slipped into the back on the book.  This is a marvellous way to structure the book and it speaks to Villareal’s skill that he was able to tell such a captivating narrative using this style of writing.

By employing fictional testimonies and documents originating from a number of different characters, Villareal is able to tell an extremely wide-reaching story about the introduction of vampires.  Most of the longer chapters are written in the style of testimonies from characters in the United States, while many of the shorter articles show a wide view of the rest of the world.  This allows Villareal to focus his main story in one specific country and focus his analysis on how the United States would react to such an event.  At the same time Villareal is also able to illustrate a much wider story showing how the vampire uprising would affect the entire world.  Exceptions to this are the chapters featuring the gloamings causing a religious and ideological schism within the church.  These chapters focus the plot on characters throughout Europe and represent some of the more fascinating fictional postulations within A People’s History of the Vampire Uprising.

While the book contains numerous narrators, authors and interviewees telling their specific stories, Villareal is still able to produce a clear overall narrative about the introduction of vampires to the world.  While Villareal initially has the individual narrators tell their own stories, eventually the characters meet and interact, allowing the multiple storylines to combine into one overarching plot.  The smaller articles and extra details within some of the longer features also allow the reader to have an amusing examination about how some social groups and individuals may react to the introduction of vampires, including celebrities such as Taylor Swift.  The end result is very well-done, overarching narrative that takes the multiple storylines within and turns it into an exciting and comprehensive overall plot.

While this is a piece of fiction, it also serves as an examination and critique of modern society.  Villareal postulates that if vampires ever did appear society would be split between distrusting such creatures and worshiping them, while the rich, famous and powerful would all try to join them, turning the gloamings into the ultimate elitist clique.  Villareal examines extremely plausible ways in which the gloamings could influence humans and attempt to win them to their side, with one chapter in particular describing how a vampire might win an election.  The result is a perceptive and astute examination of current human nature that will leave readers spinning.

5 thoughts on “A People’s History of the Vampire Uprising by Raymond A. Villareal”