From an exciting new voice in young adult fantasy fiction comes a powerful tale of independence and freedom.

Ten years ago the Kalovaxians invaded the peaceful island nation of Astrea, killing its guardians and enslaving the entire populace to work in the island’s magical gem mines.

Theodosia was only six when Astrea was invaded and her mother, the Fire Queen, was murdered before her eyes. Since then she has lived in her former palace as a prisoner to the cruel and despotic Kaiser, who seeks to destroy all trace of the Astrea culture and language. Given a new title, the Ash Princess, and forced to endure constant humiliation and punishment for her people’s rebellion, Theodosia has become a subservient creature, trying to survive as she waits for any sort of rescue.

When the Kaiser forces her to perform a terrible act, Theodosia is no longer willing to stand back and watch her people suffer. With unexpected allies suddenly close at hand, Theodosia stops a plan for her escape and instead chooses to remain at court to obtain information for the rebellion.

However, the Kalovaxians are a cruel and merciless race of warriors who excel at raiding and destroying the lands they conquer. Theodosia soon realises that supplying information to her companions is not enough; she needs to find a way to strike at the heart of the Kalovaxians and disrupt their tight control of Astrea. When opportunity presents itself, she must risk everything to give her people a shot. It is time for the Ash Princess to rise.

Ash Princess is the debut novel from Laura Sebastian and the first book in a young adult trilogy with a lot of potential.

This story is told completely from the point of view of the main protagonist, Theodosia, with a large amount of the book dedicated to her growth as a leader. Theodosia starts the book as a completely broken person, having been oppressed and abused for years and kept as a symbol of humiliation. As the story continues, Theodosia detaches herself from the persona she created to survive and starts to finally oppose her captors. Watching her obtain the courage to fight back is an integral part of the book, and her attempts to become the ruler her people need are touching and emotive. There is also a riveting inner conflict within Theodosia as she debates whether to hurt people that she cares about, even if her actions could bring relief to her people. While Theodosia strongly wishes to save her people and defeat the invaders, there is also a great desire to not become like the enemies she hates. The character runs a fine line throughout the book as a result, and many readers will enjoy how Sebastian examines this inner conflict.

Sebastian has included an intricate background setting for her electrifying story. The nation of Astrea had been brutally subjugated 10 years before the start of the story and is currently ruled by the Kalovaxians. Because of how total this subjugation has been, with a large number of deaths and the rest of the populace forced to do heavy labour, very few characters originating from Astrea are featured within the story. This background of a near-obliterated country is dark and grim, but serves as the perfect setting for an inspiring story of freedom and rebellion. The antagonists of the story, the Kalovaxians, are also the perfect villains for such a story, as they are undeniably evil. All of the Kalovaxians–even the milder ones that consider themselves Theodosia’s friends–are power hungry, destructive and feel that they are superior to all other peoples. The use of the setting and the antagonists within Ash Princess adds significant impact to the main story and forces the reader to care about the fate of the main character.

Readers of Ash Princess will enjoy the covert activities that take place as part of the main story. In order to find a way to liberate her country, Theodosia needs to infiltrate and influence parts of the oppressive Kalovaxian society. The scenes were she attempts to seduce, manipulate and commits acts of sabotage are compelling and one of the more intriguing parts of the books. In addition to the protagonist’s actions, there are also the secret plans that the Kalovaxians are undertaking. These plans are rather dark and include magical experiments on Theodosia’s people. These Kalovaxian plans result in some interesting actions from Theodosia and play a significant part in the plot. The fascinating gem magic of the Astrea plays an interesting role in the clandestine actions of both the protagonist and antagonists, and fantasy-minded readers will enjoy the resultant exploration of this branch of magic.

Ash Princess is a poignant tale of hidden strength and the fight for freedom. This is a satisfying start to Sebastian’s first series which introduces a memorable main character and a powerful story that makes full use of its awesome background story elements. This is an ideal choice for readers looking for their new fix of young adult fantasy fiction. 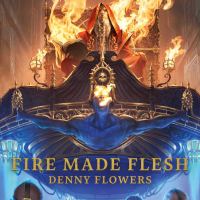