It is the unveiling of New York’s newest subway line, one of the most ambitious underground construction programs in the world.  The new express line will travel through a series of new tunnels that are now connecting the various suburbs previously separated by the Hudson River.  At the centre of this new expansion is the Visitor’s Pavilion, a gleaming state-of-the-art control centre and shopping hub situated beneath the Hudson.

The first run of the new system has been set up as a massive event, featuring the press, civic dignitaries, New York City’s mayor and even the president of the United States.  However, when the train rolls into the Visitor’s Pavilion it is not the triumphant occurrence that the waiting crowd was expecting; instead it is a scene of carnage.  The train that arrives is deserted, with all the passengers missing.  Not only that, but ragged holes have been made in the side of the carriages and the floors are covered in blood.

As the crowd panics and attempts to flee what appears to be a massive terrorist attack, an explosion rocks the tunnels and methane starts to flood the entire subway system.  As the tunnels begin to fill with gas and the slightest spark could result in another explosion, those trapped in the Visitor’s Pavilion soon discover that a far more dangerous threat is stalking them.  Something has been living under New York and the construction of the new tunnels has woken it up.  As this new threat starts to pick off both the trapped crowd and the rescuers attempting to reach them, it falls to New York’s mayor Tom Cafferty, NYPD SWAT member Sarah Bowcut and subway technician Diego Munoz to discover what is down in the dark with them.  The more they dig, the more they realise that they are dealing with something far more dangerous than they could possibly imagine, and that a sinister conspiracy has been keeping it hidden from the rest of the world.

This bold new book is the result of a collaboration between comedian James “Murr” Murray and Darren Wearmouth, a science fiction and horror writer with a number of joint novels already under his belt.  The idea for Awakened was originally developed by Murray some years ago, and represents the first novel in a new series that the two authors have been working on, with two future additions already planned for 2019 and 2020.

Awakened is a captivating adventure, science fiction and horror hybrid that goes straight for the reader’s imagination whilst throwing their action centres into overdrive.  This is one of the fastest-paced novels of 2018, as the book’s characters are forced to be quick and decisive in order to escape death.  There are ton of great sequences as the characters encounter the various dangers converging on them and must work on a range of elaborate and desperate escape and rescue attempts.  Murray and Wearmouth are able to weld together some exciting scenarios around this concept, and readers will enjoy watching the characters adapting to the problems they encounter, such as methane in the tunnels stopping them from using guns or flames to defend themselves.  In addition to these excellent action sequences, Awakened contains some truly creepy scenes that will really appeal to horror aficionados.  The characters are assailed with a range of strange sightings, noises from the darkness and the disturbing voices of children crying for help from just outside the character’s line of sight.  This pulse-pounding content is absolutely fantastic and ideal for those who love a startling adventure.

Murray and Wearmouth have also created an intriguing monster to attack the protagonists in the subway tunnel.  Without giving too much away, Awakened’s monstrous element is unique and plays into humanity’s fear of the dark and the creatures that could reside there.  The nature of the threat is revealed at just the right time, as the authors waited until the audience would be sufficiently engrossed in the book.  The eventual full reveal is one of the most memorable parts of the book, as it contains some great reactions from the characters encountering them, whilst at the same time rewarding the reader’s curiosity in a big way.  The authors work to ensure that their audience’s imagination and curiosity is continuously piqued throughout the entire story.  There is also a complex and fascinating conspiracy element that is woven into this part of the book which is intriguing to discover and unravel.  It is definitely a notable part of the story, and it looks like it will be major part of the next books in series.

The authors make significant use of multiple perspectives and viewpoints throughout Awakened.  This type of storytelling often works well for these large-scale horror novels, and this book is no exception.  This breakdown of point-of-view characters allows the reader a much larger picture of what is going on, especially as the various viewpoints tie together into one massive, high-powered story.  It is fun watching the actions of one group of people impact the decisions or choices of another group of people who are located in a different part of the book’s sprawling, underground setting.  This also allows the reader to see smaller scenarios that add to the whole story, such as one fantastic sequence which sees someone attempt to rescue the passengers only to meet their doom.  Despite it being this character’s only scene, his death affects the rest of the characters and there are multiple viewings of his corpse throughout the book to spook those who had no idea of his fate.

It is also worth noting that Murray and Wearmouth have made several homages to other works of horror within Awakened.  I was particularly drawn to several noticeable references and parallels throughout the book to Jurassic Park.  For example, there is a great reference early in the book involving the phrase “no expense had been spared” being used when discussing the celebrity written audio elements of the initial ride.  In addition, some of the characters actually compare their situation to Jurassic Park, which I found to be amusing.  These are a fun element to watch out for, and readers will enjoy noticing these throughout the book, while at the same time, appreciating that they do not overwhelm Awakened’s central horror based theme.

Awakened is a fantastic horror read that really amps up the adventure and action, leaving the reader excited for more.  With a sinister monstrous element and an enjoyable narrative containing an elaborate conspiracy-laden storyline, this collaboration between Murray and Wearmouth is a roaring success and readers should be eager to see what this duo cooks up next.

One thought on “Awakened by James S. Murray and Darren Wearmouth” 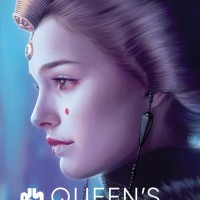 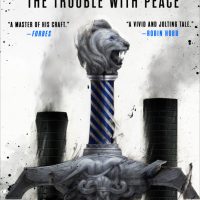