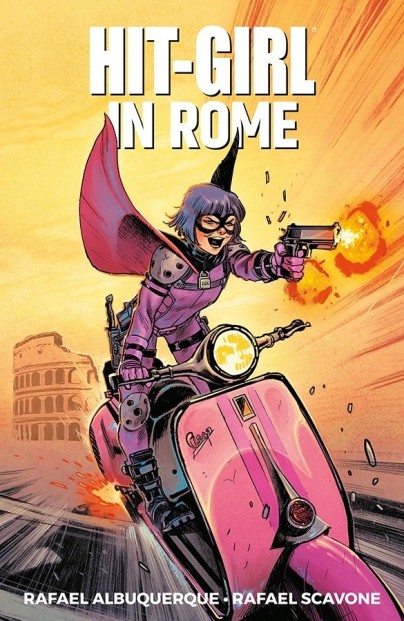 The world’s most dangerous 12-year-old, Hit-Girl, continues her world tour of crime fighting, this time heading to Rome to bring her unique brand of justice to a new group of criminals in another fantastically fun and brutal adventure.

Mindy McCready, the pre-teen vigilante killer better known as Hit-Girl, has successfully embarked on a one-girl international crusade against crime. Not only has she decimated the criminal underworld of Colombia, but she successfully eliminated a group of Canadian drug dealers while surviving all the hazards of the Great White North. Her latest adventure sees her travel to romantic and historical Rome, where a completely different breed of gangsters awaits her.

After failing to stop a masked cat-burglar stealing a bejewelled skull at the Toronto International Airport, Mindy finds herself accidently transported to Rome. Managing to recover the skull from the thief, a talented young woman known as La Gatta (the Cat), Mindy attempts to uncover who hired her to steal it and why. However, her investigation puts her firmly in the crosshairs of a dangerous and deranged mob boss, Gilistina Malvolia, who is determined the have the skull no matter what. 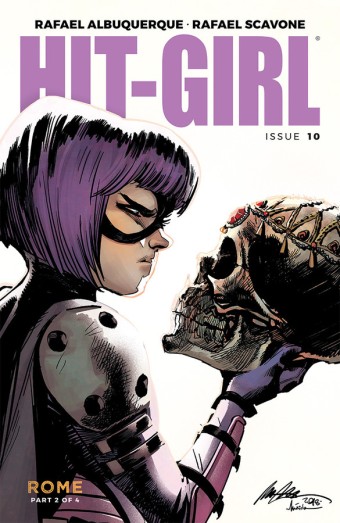 Teaming up with La Gatta, Mindy faces off against Gilisina’s legion of followers in Rome in a bloody game of cat and mouse. But between killer nuns, crazed bikers and medieval monks, Mindy might have bitten off a little more than she can chew. Is Hit-Girl capable of going up against Rome’s boss of all bosses, or will she meet a gruesome end at the hands of Gilistina and the bloody saint she serves?

In Rome is the third volume of the deeply entertaining new Hit-Girl series, which has spun off from the popular Kick-Ass comics by Mark Millar. The character of Hit-Girl appeared in all of the previous Kick-Ass comics and was also the main character of the Hit-Girl limited series (now referred to as Book Two of The Dave Lizewski Years of Kick-Ass). After the end of the final series of The Dave Lizewski Kick-Ass comics, Hit-Girl decided to leave New York and go on a worldwide tour of vigilante justice. This international killing spree is covered in the ongoing Hit-Girl comic series, which started in early 2018. The Hit-Girl comics now feature a series of four issue storylines (which are later released within their own collected volume), with each storyline featuring a change of writers and artists. I really enjoyed the first volume of the Hit-Girl series, In Colombia, last year and I previously reviewed it on this blog where I gave it a full five stars. The second volume, In Canada, was an interesting follow-up, and I quite enjoyed the fun change in location.

The focus of this review is In Rome, which is the third volume of the Hit-Girl series. Containing issues #9-12 of the Hit-Girl series, this comic was written by Rafael Albuquerque and was drawn by his frequent collaborator Rafael Scavone. In Rome was an excellent addition to this amazing series, and I really enjoyed where the creative team took this fun and exciting story. Not only does it feature an enjoyable and fascinating plot, but there is some excellent character work contained within and some superb artwork, making for a deeply entertaining read. 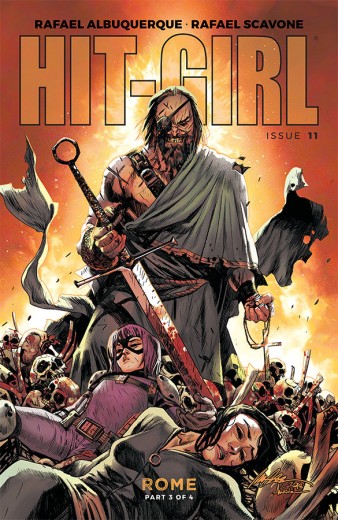 This third volume of Hit-Girl is a pretty crazy and over-the-top read, containing a very weird story. Not only does it continue to showcase the rampage of a 12-year-old vigilante as she takes out every bad person she comes across in the most gruesome or hyper-violent way she can, but it also features a very unique new set of opponents for her. The villain of In Rome is a murderous old lady, Gilistina Malvolia, who has managed to take control of the entire criminal underbelly of Rome. Gilistina is a former nun who, after being kicked out of her order for murder, now follows the teachings of a former Vatican assassin who was canonised as a saint. To that end, she now controls the city through fear and violence, murdering anyone who disappoints her, including a poor wannabe pasta chef in a rather fun introductory scene for her. Gilistina is after the bejewelled skull that Hit-Girl liberates, the skull of her beloved saint, and she is tearing up Rome to find her. As a result, Hit-Girl must go up against Gilistina’s minions, including nuns armed with machine guns, angel inspired bikers and monks armed with medieval weapons. This is all deeply insane and I loved every minute of it as this crazy story is a deeply fun and thrilling treat.

In addition to the fantastically kooky story, there are also some great character moments throughout the comic which add some dramatic elements to the plot. One of my favourite parts of it is Mindy’s team-up with the thief La Gatta. La Gatta, whose real name is Paola, is a master thief who gets caught up in Gilistina’s plans to obtain the saint’s skull and is forced to work with Mindy to survive. Despite being way older than Mindy, La Gatta comes across as the more scared and incapable of the two and is constantly shocked by all the extreme violence going on around her. The two girls bond throughout the book, especially over apparent similarities in their familiar situations and their relationship reminded me a bit of her dynamic with Kick-Ass (sarcastic younger girl mentoring someone older but way more out of their depth). It was nice to see her team up with a friend for once in this series, rather than with a killer she is blackmailing or the ghost of her father, and there are some generally funny moments between the two of them. It also ends in a rather good plot twist that I will be interested to see if the series comes back to at some point.

In Rome also does a great job of looking at the unique dynamics of Hit-Girl’s character. Despite the fact that she was raised as the ultimate killing machine, Mindy is still a little girl, and this shows through in a number of different ways, from her cute civilian outfit and toys to her rather black-and-white view of criminality. There is also a tangible sense of innocence lost around her, as well as a longing for family and her dead father, as she makes sure to interfere in an attempted theft from a tourist family she witnesses. The look of despair and unhappiness on her face after she sees the happy family walk off after she helps them is pretty heartbreaking and it makes you appreciate that she’s not as emotionally put together as her confident exterior would imply. This longing for family and connection also explains her willingness to work with La Gatta, as she sees a lot of herself in her, and it also opens her up to some subtle manipulation. All of this proves to be a really intriguing addition to the story, and I am curious to see what other examinations of Hit-Girl’s character are done in future volumes of this series. 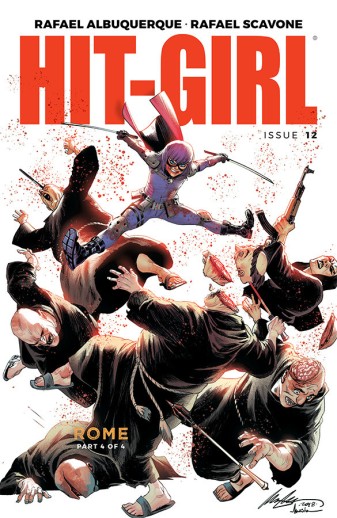 This volume of Hit-Girl contains some pretty amazing artwork which I really enjoyed. The artistic team behind In Rome have done a great job drawing this epic adventure, and there are some awesome scenes throughout. Based on what the story is about, there is an obvious focus on all elaborate violence and death that Hit-Girl brings wherever she goes. There are some gruesome and bloody sequences throughout the book and all the different forms of fights and violence are done pretty spectacularly. I also liked the cool designs they came up with for the various characters; I was especially impressed by the realistic faces which did a fantastic job conveying all the character’s emotions. For example, you get a real sense of the anger and hatred of Gilistina (whose stooped old-lady look is a lot of fun), the despair of the various victims of either Gilistina or Hit-Girl or the complex range of emotions of Mindy, which range from joy while she kills everyone, to something more subtle and tragic when she settles down long enough to feel. This great artwork combines extremely well with the volume’s excellent story, and it produces a really enjoyable Hit-Girl comic.

Overall, I really quite enjoyed the third volume of Hit-Girl, In Rome, and I thought it was an absolutely fantastic addition to the series. This is a perfect read for anyone interested in a fun and thoroughly entertaining comic chock full of ridiculous plot points, intense action and some character work that is surprisingly deep at times. This has proven to be an outstanding series, and I really like how they change creative teams with each volume. I must make an effort to get the next few volumes of this series, and I am especially intrigued by the fourth volume in the series, In Hollywood, which was written by Kevin Smith. In the meantime, In Rome is really worth checking out, and I would definitely recommend it.

One thought on “Hit-Girl, Volume 3: In Rome by Rafael Albuquerque and Rafael Scavone” 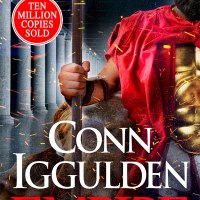 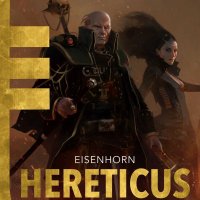 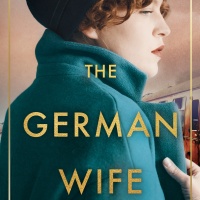