For this entry, my editor and future wife Alex managed to talk me into letting her do a review.  We hope you enjoy this guest review, and Alex may do some more in the future. 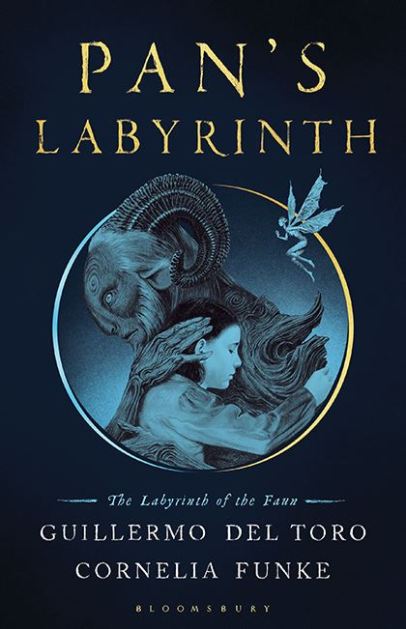 As the chief editor for The Unseen Library, I read far more book reviews than books, but every now and then the mood strikes just right, and I am fortunate to share a house filled to the brim with books waiting to be enjoyed. I thought I’d commemorate the latest occasion by writing a review of my own:

Pan’s Labyrinth is a Spanish-language dark fantasy film written and directed by acclaimed filmmaker Guillermo del Toro. Thirteen years after its release, Guillermo del Toro and bestselling author Cornelia Funke have transformed the screenplay of the film into a beautiful work of prose.

Pan’s Labyrinth is part of a modern tradition of fairytales in which children have fantastic adventures whilst the adults are busy with war. In Spain, in 1944, young Ofelia and her mother join the household of Capitan Vidal, who is responsible for hunting down the anti-fascist guerrillas hiding in the mountainous forests nearby. Left to her own devices and enchanted by fairy tales, Ofelia is drawn to the ancient stone labyrinth near their new home. There she meets the Faun, who tells her she is in fact the missing princess of the Underground Kingdom. In order to reclaim her place in the kingdom and escape her terrible new stepfather, she must prove her courage and worthiness by completing three tasks. This is easier said than done; these tasks themselves are life-threateningly perilous, but Ofelia must also try to protect herself and her heavily pregnant and ailing mother from the ruthless Capitan and the rebels at the door.

Guillermo del Toro is renowned for making visually stunning films, and Pan’s Labyrinth was no exception; in fact, it won Academy Awards for Best Cinematography, Best Art Direction and Best Makeup. I am happy to report that the novelisation of Pan’s Labyrinth faithfully re-imagines the amazing sets, characters and creatures of the film. In the absence of cinematography, visual design and Doug Jones in monster makeup, the authors have relied on using a great deal of descriptive language to bring scenes to life in text. This is also supported by a number of illustrations throughout the book which clearly drew from the art of the film. It had been many years since I last saw the film, but the imagery of the story is so well produced that I was easily able to imagine many long-forgotten scenes according to del Toro’s vision.

There are many advantages of this novelisation. In particular, the book gives a great deal of insight into various characters not afforded by the film. We see Ofelia’s thought processes as she observes the adults around her and as she obeys or defies the Faun’s instructions. We understand the fierce motivation of Mercedes and Dr Ferreira as they desperately try to assist the rebels in the hills without being discovered. Most terrifying of all, we catch a glimpse of the inner mind of Capitan Vidal, the Wolf, whose horrendous acts of violence rival those of the Pale Man. The inner monologues of these characters provided in the book enable us to have a greater appreciation of their perspectives, actions and motivations.

For the most part, the novelisation follows the story of the film faithfully, but it also includes a number of additional chapters. These feature stories of the Underground Kingdom and its magic bleeding into the Upper Kingdom, creating the lore and mythology that surrounds the Spanish landscape in which the story is set. These grim and interconnected fairy tales provide amazing context for the enigmatic Faun and the nature and gravity of the tasks Ofelia must complete, as well as being beautiful and moving stories in their own right.

Fans of the film will know exactly what to expect from the novelisation of Pan’s Labyrinth and will appreciate the additional fairy tales and insights it provides. Those who haven’t seen the film (and there is always a cohort of cinemagoers that dislikes or struggles with subtitled films) will feel as though they had, as this gruesome and fantastic story has been beautifully transferred onto the page.

5 thoughts on “Guest Review: Pan’s Labyrinth: The Labyrinth of the Faun by Guillermo del Toro and Cornelia Funke”