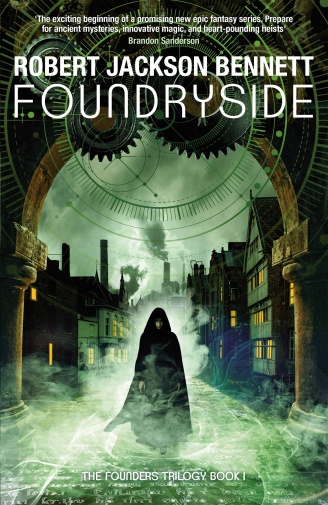 Hot on the heels of his sensational first trilogy, Robert Jackson Bennett has produced another outstanding fantasy read with Foundryside, a bold and exiting novel that brings together an excellent mixture of action, intrigue and humour and powers it with a great location and some inventive and enjoyable new fantasy elements.

In the city of Tevanne, everything runs on scrivings, magical inscriptions that make inanimate objects sentient and allow them do incredible things.  Scrivings give the city of Tevanne incredible power and influence, and the creation of scrivings has been refined into an industrial process controlled by four powerful merchant houses.  These merchant houses have complete control of the city, and those living outside their compounds are a poor, desperate bunch, attempting to eek a living from a city that doesn’t care for them.

For escaped slave Sancia Grado, the only way to survive is to steal.  Gifted with unique abilities, Sancia is one of the city’s most successful thieves, who dreams of escaping from both the city and the discomfort her abilities provide her.  When Sancia is offered a significant sum of money to steal a valuable artefact from the heavily guarded city docks, she jumps at the chance.  But not everything is as it seems, and after stealing the item, Sancia is betrayed and is now being hunted by shadowy figures with incredibly advanced scrived devices.

At the same time, the guard captain Gregor Dandolo is also hunting for Sancia, determined to bring her to justice for her destructive theft.  Caught in the middle of a conspiracy that spans the entire city, Sancia and Gregor are thrust together and must search for new allies if they are to survive.  As the mysterious assassins descend upon them, their lives may depend on the abilities of one powerful artefact.  But while they find a way to fight back, an ancient evil is about to be unleashed which could bring the entire city down around them.

Bennet is a well-established fantasy writer who is probably best known for The Divine Cities series, which concluded in 2017.  Readers may also be familiar with some of his standalone works, including The Troupe, Mr. Shivers and the science fiction book The Company Man.  Foundryside is the latest book from Bennet and represents the start of the captivating new The Founders trilogy.  Foundryside contains a powerful and captivating story set within a fascinating city and containing some very unique magical elements that are a truly enjoyable part of the book.  The main story contains a significant amount of adventure as the book’s protagonists attempt to uncover a conspiracy around the origin of the book’s central magical element.  Readers will be left guessing about the secrets behind the conspiracy, while several of the book’s dramatic twists will leave them reeling from the emotional gut punches.  The final conclusion of the book sets up some exciting options for the rest of the series, which I will definitely be checking out when they are released.

One of the main highlights of this book is the fantastically unique magical fantasy element known as scrivings.  Scrivings are a form of magical writings that enhance items they are engraved on, giving them certain properties, abilities or autonomy.  For example, carts can be scrived to make them travel from point A to point B, items can be scrived to move at a greater speed by making them believe they are dropping from a great height, and materials such as wood can be made to believe they have the hardness or consistency of stone.  There are a huge range of elaborate rules around scrivings, and the author has presented some fascinating background lore which provides some interesting explanations around the creation and utilisation of these items.  An unexpected side effect of the scriving process is that the scrived items are given a form of magical sentience.  Throughout the book, Sancia is at times gifted with the ability to listen to the listen to the thoughts of the scrived items, and the items are shown to be shouting out their defined roles and the rules they have to follow, often in the form of riddles.  There are quite a few funny scenes when some of the characters attempt to manipulate scrived items by exploiting loopholes in their programming, and watching people and magical items have a debate is very amusing.  The use of scriving throughout Foundryside allows the author to create some fantastic and, at times, over-the-top action sequences as the characters wield weapons that have been imbued with the ability to hit harder or faster than conventional, or items that give other risky benefits in combat.  The hidden history of the scrivings is also quite intriguing, and watching the characters uncover it is an essential and enjoyable part of the plot.  Overall, Bennett’s magical scrivings are a fantastic part of this book that readers will really love to discover.

In addition to the creative magical elements, Bennett has also set his story in an amazing new fantasy cityscape.  The city of Tevanne is full of scrived items, and Bennett has done a great job inserting these magical items into every part of the city’s day-to-day life.  An interesting feature of this city is the way that significant portions of the city has been broken up into ‘campos’, merchant enclaves where scrived items are created at an industrial level.  Each of these four campos is ruled over by a powerful merchant house, and a large amount of the book’s excellent intrigue elements are fuelled by the competition between these houses.  The campos also serve as interesting social boundaries, with the people living inside having everything that they need, while those living outside, in the area known as the Commons or Foundryside, are barely getting by.  Having areas of the city completely controlled by rich merchants is an element with a lot of potential, especially when these merchants have their own private guards and are essentially laws unto themselves.  Bennett makes full use of this, creating thrilling sequences that feature his characters sneaking into and around these heavily guarded compounds.  The control and distribution of power, here represented by the creation of scrivings, is also a compelling part of the book, and Bennett has created some great characters and scenarios around this development.

I really have to mention the strong and funny characters that are featured throughout Foundryside and are an incredible part of this exciting story.  The main protagonist is Sancia Grado, an escaped slave and thief who finds herself thrust into the centre of a deep conspiracy.  There is a lot going on with Sancia, with her tragic backstory, her unique scriving based powers that are both a blessing and a curse, and her fun and fierce attitude developed from a life on the streets.  All these elements combine together into one awesome character, and Bennett uses her to full effect as his central protagonist.  The book’s other main characters are also quite entertaining and enjoyable.  There is Gregor Dandolo, the tough and law-abiding soldier whose sense of duty draws him into the middle of the conspiracy.  Gregor is a very action based character, but his backstory is also quite traumatic and he shares some great moments with Sancia, a character he initially has very little in common with.  There are also some amazing scenes where Gregor must come to terms with the actions of his family’s merchant house, as well as some strong and emotive twists involving his history.  Other characters include the master scriver, Orso Ignacio, who acts as the book’s resident mad scientist and comes with some very fun ideas, from an audacious break in plan to a funny solution to his legal problems at the end of the book.  I also really enjoyed Orso’s assistant, Berenice, who Bennett uses to great effect as the book’s straight woman for the more outrageous characters, especially Orso, while also serving as Sancia’s love interest.  While all these characters are really enjoyable focuses for the book, the hands-down best character has to be Clef, the sentient key.  Before this book I would have had a hard time believing that a talking key could be a great central character, but I’m very happy that Bennett has proven me wrong.  Not only is Clef a fun and enjoyable character that the reader becomes strongly attached to, but a huge amount of Foundryside’s best humour comes from Clef’s banter and observations.  Bennett has really outdone himself when it comes to these characters and I had a great time watching their adventures.

With an amazing story, fantastic humour, enjoyable and memorable characters and some unique and fascinating fantasy elements, Bennett has once again shown the world what a talented fantasy writer he is.  Foundryside is another outstanding release from Bennett, and I had a lot of fun with this book.  Readers of this book are in for a real treat and they will be very eager to see where The Founders trilogy goes next. 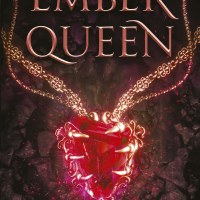 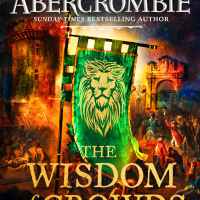