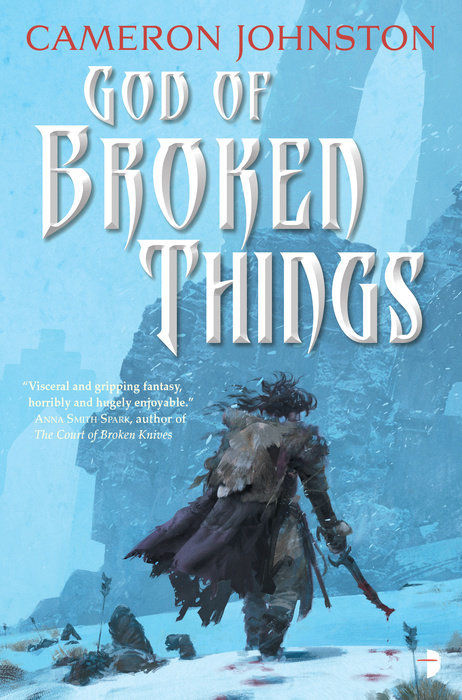 Those readers looking for the next entertaining grimdark fantasy adventure to sink their teeth into need look no further than God of Broken Things, the electrifying second book in Cameron Johnston’s Age of Tyranny.

It has only been a few short months since the devastating attack by the Skallgrim raiders on the city of Setharis, which severely weakened the city. Despite repulsing the Skallgrim and their monstrous hordes, Setharis is still in incredible danger. The Skallgrim forces are massing to launch another attack on Setharis, and the Skallgrim’s masters, the parasitic alien lifeforms known as the Scarrabus, are determined to enslave the entire city to their will. Setharis’s salvation once again rests in the hands of its most hated son, Edrin Walker.

Edrin is powerful magus whose rare abilities allow him to crack open and control the minds of all those around him. His breed of magus, known as tyrants, are feared throughout the world due to their propensity to lose control and use their magic to rule whole civilisations. Despite his role in saving the city from the Skallgrim, Edrin is still distrusted by both the common people and his fellow magus of the Arcanum. However, his skills may be the only thing that can win the war against the Skallgrim and the Scarrabus.

A massive force of Skallgrim are advancing over the mountain passes of the Clanholds, hoping to launch a fresh assault on Setharis. Against his will, Edrin is forced to lead a small army to reinforce the tribes of the Clanholds against the Skallgrim army. Accompanied by a small personal bodyguard of killers and thieves, Edrin leads his forces into the mountains, where far more dangerous things than the Skallgrim and their monsters lurk. Spirits, demons, gods and his own deadly past all lie in wait for Edrin, whose powers have been altered following his battle with a treacherous god. Can Edrin and his forces hold back the Skallgrim, or will he succumb to one of the many horrors in the mountains? And what happens when the tyrant comes out to play?

Johnston is a talented author whose debut novel, The Traitor God, really impressed me last year thanks to its awesome story and enjoyable main character. As a result, I was extremely keen to get a copy of the sequel, God of Broken Things, this year and was very happy when I received it a few weeks ago. God of Broken Things turned out to be a fantastic follow-up to the first book and I had an incredible time reading it. Not only does Johnston present another wildly entertaining story for the reader to enjoy, but he also does a fantastic job of expanding his dark fantasy world and exploring the complex mind of his main character.

I really liked where Johnston took the story in this book. While The Traitor God’s story of a hunt for answers in the dark fantasy city was cool, I really liked seeing the main character go to war in God of Broken Things. The whole storyline of Edrin leading an army up into the Clanholds, a dangerous mountainous environment filled with all manner of horrors and dangers was really cool, especially as he kept encountering worse situations and more terrifying opponents. This resulted in some epic moments and massive battles, and Johnston also took the opportunity to explore the history of several of the different races mentioned within the first books, including the Scarrabus, the Ogarim and some more mystical creatures like spirts and demons. This expansion of the Age of Tyranny universe was quite intriguing, and I wonder if there will be more exploration of the world and the various mentioned multiverses in future books. I also liked the deeper look that the author took into his protagonist’s past, showing some of the activities that occurred during the years he was exiled from Setharis. I loved the various twists and epic moments that Johnston sprinkled throughout the book’s plot, and there was never a dull moment in the entire story. I especially enjoyed how the final battle in God of Broken Things ended, especially as the author included a clever red herring in the book’s formatting to throw the reader off. Overall, this was an incredible story, and Johnston did an amazing job trapping me within this entertaining narrative.

One of the best parts of this book was the author’s continued focus on the protagonist, Edrin Walker, who serves as the book’s narrator and point-of-view character. Edrin was already a fairly complex character in The Traitor God, where he was portrayed as a powerful exiled magus hated, distrusted and ostracised by everyone due to the specific nature of his magical gift. Because of the way he is treated he acts hostile and uncaring to the world, while still participating in the odd act of heroism and compassion. This is continued in the second book, where Edrin continues to battle with his natural instincts and irritation while trying to do the right thing, especially for the few people who actually like or respect him. I really liked the way that the author continued to show Edrin exploring his moral side in this book as, against his better judgement, he actually attempts to help people and keep Setharis safe. The various sacrifices that he subsequently makes for the greater good are very much against the grain of his original character, and it is interesting to see this side of Edrin grow.

Due to the way he is treated, Edrin is an incredibly jaded character, and the author utilises this in a number of clever ways. Not only does this ensure that Edrin is the most likeable character in the book, mostly because he stands in sharp contrast to all the other magus characters, who are elitist snobs, but it also makes him a really entertaining narrator. The character’s sarcastic and mocking manner permeates the entire way he tells the story, resulting in some great reactions and a very amusing overall story.

Edrin continues to get into all sorts of entertaining misadventures in God of Broken Things, and it is hard not to love the unorthodox way he deals with things. Not only does he lead a bodyguard of deranged killers into battle but he rarely ever takes things seriously, no matter who he is dealing with. I love the disrespect and mockery that the character shows when encountering anyone in authority, be it friend or foe, magus or human, god or monster, and I laughed out loud at the way he got his revenge on one of Setharis’s gods in this book. It was also great to see the character apply his particular brand of bastardry to the battlefield, coming up with all manner of unconventional traps and attacks for the forces that are up against him. I particularly loved the cool way he took down the main antagonist of this book, and it really reflected both his cunning and his growth as a character.

The main character’s mind-bending magic continues to be a really cool part of this series, especially as his abilities become even more powerful in God of Broken Things. Johnston’s portrayals of the way that Edrin’s powers to break into and manipulate the minds of all those around him is done extremely well and it results in a number of epic scenes. I never realised how many creative ways someone could magically manipulate a person’s mind until seeing some of the scenes in this book, as Johnston comes up with some very inventive ways to utilises his protagonist’s magic. I especially loved seeing Edrin using these powers in the middle of the battle, as there are some awesome ways he disadvantages his enemies and helps his allies. However, the author also explores the consequences of the tyrant powers, as Edrin continuously runs the risk of taking things too far and grossly abusing his powers. Several examinations of the character’s guilt over some of the mental actions he commits become a compelling part of the story, and the character’s mental magic is a great part of the book.

Those readers who are looking for an explosive amount of fantasy action are in for a real treat with this book. Johnston makes sure to include a ton of battles and fight sequences in God of Broken Things, as the ragtag defenders of the Clanholds face off against a massive horde of Skallgrim, Scarrabus, demons and monsters. All of these fight scenes are incredibly brutal as Johnston depicts some amazing battles throughout this book. Most of these scenes are enhanced through the use of magic, and the sheer destructive power of the various characters’ magical abilities is pretty impressive. The various demons and monsters the protagonist finds himself up against in this book are pretty gruesome and offer up some pretty great battle scenes as a result. Overall, the action in God of Broken Things is quite superb, and fans of bloody fantasy fights will not be disappointed.

Cameron Johnston’s second outing, God of Broken Things, is an amazing piece of grimdark fantasy fiction that proved to be just as much fun as his debut novel, The Traitor God. I had an incredible time reading God of Broken Things as the excellent combination of story, magical action and character work kept me trapped until the very last page. Readers are guaranteed to love this outstanding dark fantasy read, and I strongly recommend this book to anyone looking for a fun and powerful adventure. The ending of the book makes it a little unclear if Johnston will continue the Age of Tyranny series, but I will be keeping a close eye out for any future books from this rising star in the grimdark fantasy genre.

6 thoughts on “God of Broken Things by Cameron Johnston”