For this latest Book Haul post, I am going to do something a little different and exclusively look at the comics that I have recently gotten copies of.  Like many people at the moment, I have been stuck at home for the last few weeks, and it is starting to drive me a little crazy.  In order to alleviate the boredom, I have ordered a few comics to keep me sane, and all of them started showing up over the last week or so.  I actually have a large pile of new comics on the dining room table at the moment (it goes well with the multiple piles of books I also have), and all of them are pretty cool.  I am actually planning to review most of these comics at some point at the future, so I thought I would take the time to highlight what I have gotten and what some of my early impressions about them are.

Usagi Yojimbo: Volume 34: Bunraku and Other Stories by Stan Sakai

The first entry in this post is the latest Usagi Yojimbo volume, Bunraku and Other Stories.  I am a massive fan of this series and Sakai is easily one of my favourite authors at the moment.  I have been looking forward to this latest volume for a whole year and it really did not disappoint, containing some amazing stories, intense artwork and interesting concepts.  I am working on a review for it now, and should hopefully get it up in the next few days.

Hit-Girl: Volume 4: In Hollywood by Kevin Smith and Pernille Ørum 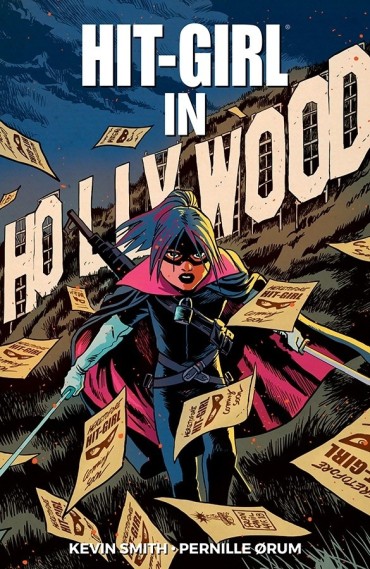 The next comic is the fourth volume in the Hit-Girl series, Hit-Girl in Hollywood.  I have already reviewed this interesting entry in the series and it is a fun book to read, even if it is a tad extreme in places.

This is a fun one that I have been meaning to grab for a while.  The Sting is a cool Firefly limited series which sees the return of the murderous antagonist Saffron, who needs the female crew members of Serenity to pull off her latest heist.  This was an exciting and clever comic, written by Delilah S. Dawson (check out my review for her 2019 book, Star Wars: Black Spire), and I look forward to writing a review for it in the future.

The next comic is Rogues and Rebels the final volume in the excellent Star Wars comic series.  I have been loving this series ever since reading the first volume, Skywalker Strikes, and I think that Rogues and Rebels ends this current series rather well.
In addition to the four recent releases I detailed above, I also ordered in the first four volumes of the 2016 Batman series by Tom King, as well as its crossover with The Flash series, The Button.  I recently read a couple of later volumes on this run of Batman and I really enjoyed them, so I thought I would got out and grab the whole series.  I am extremely happy I made this decision, as each of the four Batman volumes are pretty damn epic, and I am planning to do Throwback Thursday reviews for each of them at some point in the future.  I haven’t had a chance to read The Button yet, but I sounds rather cool, especially as it ties into the Flashpoint and Doomsday Clock limited series.

I also have to point out the fantastic parcel that I ended up getting the Batman comics in.  Unlike the four volumes above, which I got from Book Depository, I got all the Batman comics from my local comic store, Impact Comics, who have been organising deliveries for the last two months.  When I got it, I was rather amused to find the following sketch of Batman drawn onto the packaging.  I love that the team at the comic book shop are managing to have fun during this time, and I am rather curious to see if anything will be drawn onto the next package that I order from them.

Batman: Volume 1: I am Gotham by Tom King and David Finch

Batman: Volume 3: I am Bane by Tom King, David Finch and Danny Miki

That’s the end of this latest Book Haul post and I hope you find this comic themed entry interesting.  Make sure to keep an eye out for my reviews of these comics in the future, and good luck with finding your own way to stay sane at the moment.