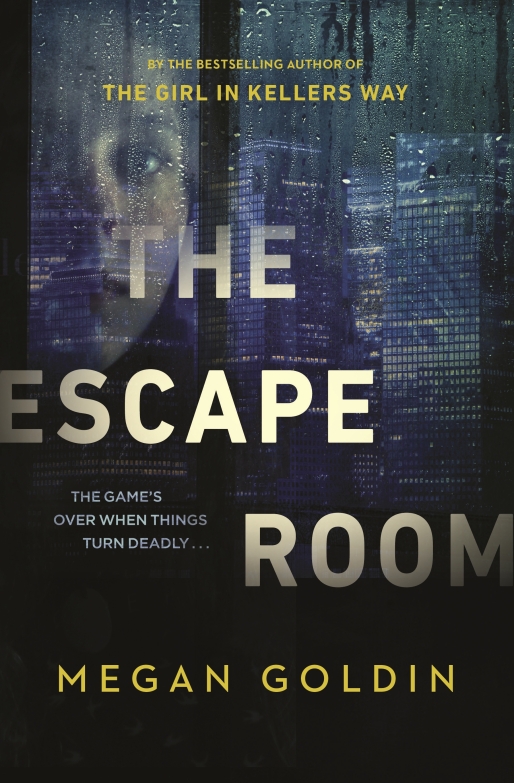 Australian thriller star Megan Goldin follows up her 2017 debut, The Girl in Kellers Way, with The Escape Room, a sensational new story that stabs right into the heart of Wall Street and the corruption and death festering within.

For years, the high-flying Wall Street investment team of Vincent, Jules, Sylvie and Sam have been the ultimate movers and shakers in the world of rich financiers.  Despite years of success, recent setbacks have put them all at risk of being fired from the large investment firm of Stanhope and Sons.  Ordered to a mandatory team-building exercise, the four colleagues meet at a half-constructed building and enter an express elevator to one of the top floors.  However, the elevator only ascends halfway up the building before stopping and leaving them suspended between floors and high above the ground.  As the four investors attempt to work out what is happening, they receive a chilling message: “Welcome to the escape room.  Your goal is simple.  Get out alive.”

While the team searches for a way out of the elevator, it soon becomes apparent that this is no ordinary escape room.  Secrets and lies are revealed through cryptic clues, and the information revealed is designed to make the four strong personalities clash and lash out at each other.  But the greatest mystery is the clues that hint to the team’s past, and particularly to a dark secret they have kept hidden for years.  As time passes and their situation becomes even more desperate, the four financiers start to turn on each other in their search for answers.  Who has trapped them, and how is it linked to the deaths of two young women who used to be members of their team?

The Escape Room is the second book from Goldin and is another great work from this fantastic Australian author.  I really enjoyed this book and found it to be so compelling that I read the whole thing in one go, intrigued as I was by the unique concept and eager to see how the story ended.

Goldin has split her book into distinctive halves, with two separate stories told in alternating chapters throughout the book.  Half of the book is dedicated to the characters trapped in the elevator and is set over the period that they spend in their confinement.  The other half of the book focuses on the life of Sarah Hall, a young college graduate and entrant to the team at Stanhope and Sons.  The chapters that focus on Sarah are set over several years leading up to the events shown in the book’s other storyline.  The chapters following Sarah feature younger versions of the characters trapped in the elevator and provide significant backstory on these people and the work that they do.

Apart from plot content, there is also another key change between the two halves of the book that is very noticeable to the reader.  The chapters set within the elevator are all told in the third person from the viewpoints of the four characters trapped within it.  However, the chapters set in the past that focus on Sarah are all told in the first person.  This is an effective way of differentiating between the two halves of the book and represents a distinctive change of tone within the story.  The use of two different styles is an interesting choice from Goldin, but it actually works really well in this book.  The third person point of view is the best choice for the scenes in the elevator, as it allows the author to show the actions of the four characters, each of whom have strong personalities.  It also allows the reader to see the mindsets of each of the characters, as their recent actions and relationships issues are explored at multiple points throughout the chapter.  These extra details add to the story and help explain the pressures they are under and the reasons they start to disintegrate mentally.  Using the first person point of view for the chapters following Sarah is also a good choice from Goldin, as the reader gets to see Sarah’s personal experiences of the Wall Street lifestyle and her impressions of the characters from the other storyline who are her superiors at the firm.  This allows the reader to see the characters who become desperate and crazy in the elevator chapters as they were when they were confident and arrogant Wall Street hotshots.  This results in some great scenes and is an amazing pay-off for this unique choice of format.

The Escape Room contains some exceptional storytelling from Goldin, who has managed to create an intricate and captivating thriller.  The scenes of the book set in the elevator are particularly intriguing, as the reader gets to witness these characters slowly become more erratic the longer they are trapped, and finally turn against each other.  The final reveal of who is set up the escape room is a little predictable towards the end of the book.  That being said, there are some great twists and turns getting there, as well as some exciting revelations, such as how the whole situation was set up, the motives behind it, as well as which characters in the elevator actually knew the dark secret that resulted in their captivity.  These additions to the narrative are intricate and clever, and are one of the main reasons that The Escape Room is such a great read.

While this book had a number of amazing elements, the thing that I enjoyed the most was the examination of the Wall Street lifestyle.  Goldin has done a superb job of capturing the sleaze, the sexism, the nepotism and the cronyism that infects such an old-school boys’ club like Wall Street.  The descriptions of the lifestyles that the Wall Street brokers have to live are just insane, and Goldin spends significant time describing every aspect of these character’s lives and how their work, with the long hours, focus on appearances, the corporate backstabbing and the hunt for more money completely consumes their lives.  While Goldin does not paint Wall Street in the best light, it is the perfect background for a thriller, and I really hope that she returns to this setting in some of her future books.

The Escape Room by Megan Goldin is an outstanding second outing from this amazing new Australian author.  With a brilliant setting that contains a deep and confronting look at the daunting Wall Street lifestyle and a complex and captivating narrative that masterfully combines two excellent storylines, The Escape Room takes the readers on a wild thrill ride that they will be unable to escape.

8 thoughts on “The Escape Room by Megan Goldin”