In this week’s Waiting on Wednesday I will be look at The Possession by Michael Rutger, the sequel to one of the creepiest books I read last year, The Anomaly.  Michael Rutger is an acclaimed author of horror and thrillers, having written a number of great novels over the years under a number of different names.  The Anomaly was a particularly amazing book that placed a team of amateur myth hunters inside a genuine and over-the-top ancient mystery and a real-life conspiracy which they were forced to unravel in order to survive.  In the second book, the team will face an entirely new challenge.

Still recovering from the shocking revelations they uncovered deep in uncharted territory in the Grand Canyon, American myth and legend investigator Nolan Moore and his team take on a new mission, investigating a rumoured case of witchcraft and possession.

Nolan hopes their new case, in a quaint village in the middle of the woods, will prove much more like those he and his team investigated prior to their trip to Kincaid’s cavern.

But as the residents accounts of strange phenomena add up, Nolan and company begin to suspect something all too real and dangerous may be at play. A force that may not be willing to let them escape the village unscathed.

The new story sounds like a whole lot of fun, as the team once again finds themselves with a genuine anomaly.  I really enjoyed the science fiction based horror story that featured in The Anomaly, and I am intrigued by the potential fantasy element to this story, as the synopsis makes it sound like they are encountering either demons or witches.  If Rutger continues to follow the pattern established in The Anomaly, this book will feature some historical investigation as Nolan and his production team of side characters attempt to find the source of the mysterious events.

In the first book of this series, Rutger showed off his ability to craft a disturbing and memorable piece of horror, especially through his utilisation of the claustrophobic darkness that surrounded his characters in a cave.  It will be interesting to see what in The Possession will inspire Rutger’s horror element, but I am sure it will be amazing.  After falling in love with several of the characters from the first book, I am almost a little afraid to check The Possession out, as the chance of all of them surviving seems a little low.

The Possession by Michael Rutger has the potential to be a wildly thrilling piece of horror fiction, and I am very excited to see how the author creates another dark and chilling story.  I am very tempted to check out this book’s audiobook format, especially if they get Brandon Williams to narrate it, as he did a superb job with The Anomaly, and his narration really helped to enhance the horror elements, especially the powerful lack of light around the characters.  The Possession is very high up on my list of 2019 reads, and I am very much looking forward to listening to another excellent horror read. 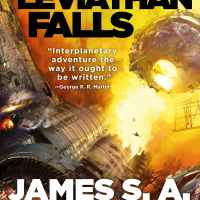