Welcome to my weekly segment, Waiting on Wednesday, where I look at upcoming books that I am planning to order and review in the next few months and which I think I will really enjoy.  I run this segment in conjunction with the Can’t-Wait Wednesday meme that is currently running at Wishful Endings.  Stay tuned to see reviews of these books when I get a copy of them.  For my latest Waiting on Wednesday I take a look at an upcoming massive thriller than I am very confident is going to end up being one of the best books of 2021, Never by the always incredible Ken Follett. 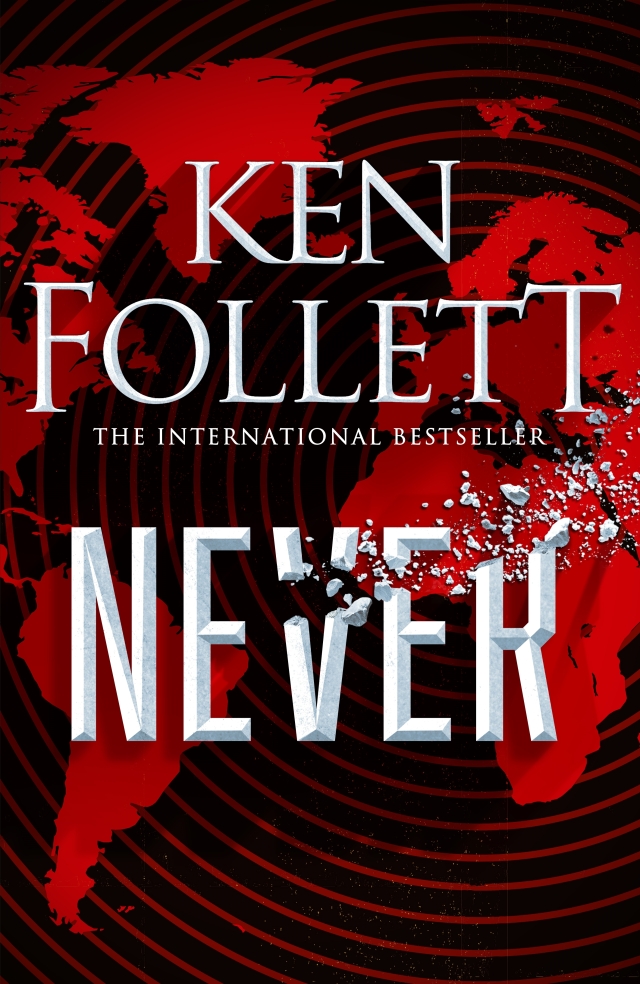 I have long been a fan of Ken Follett’s work.  Not only is he one of the best authors of historical fiction in the world today but he is also one of my all-time favourite authors.  Follett started writing back in the 1970s with several intriguing thriller novels, such as Capricorn One, Eye of the Needle and the Apple Carstairs series.  However, he really came into prominence in the late 1980s when he wrote the epic historical fiction, The Pillars of the Earth, an iconic and powerful novel about a group of unique people in medieval England.  The Pillars of the Earth is easily Follett’s most successful novel, spawning a major television adaptation with an all-star cast.  Since then, Follett has gone on to write several other massive and detailed historical novels, including the outstanding Century trilogy, which chronicles the major events of the 20th century, as well as sequels to The Pillars of the Earth, World Without End and A Column of Fire.  Follett’s latest novel, The Evening and the Morning, a prequel to The Pillars of the Earth that presented a captivating and fascinating tale of survival, intrigue and love in the Dark Ages, was an extraordinary read and it was easily one of the best novels of 2020.

Since we only just got a Follett book last year, I honestly was not expecting the author to release another massive novel for at least a couple of years.  As a result, I was happily surprised when I found out that Follett had a brand new book on the way, especially one that is going to be 800+ pages long (depending on the version).  Never, which is currently set for release in early November 2021, will be an intense thriller that looks at modern events at a global level.  While I am more familiar with Follett as a historical fiction author rather than a contemporary thriller writer, this new book sounds pretty incredible and I cannot wait to read this compelling story.

In the Sahara Desert, two elite intelligence agents are on the trail of a powerful group of drug-smuggling terrorists, risking their lives–and, when they fall desperately in love, their careers–at every turn. Nearby, a beautiful young widow fights against human traffickers while traveling illegally to Europe with the help of a mysterious man who may not be who he says he is.

In China, a senior government official with vast ambitions for himself and his country battles against the older Communist hawks in the government, who may be pushing China–and its close military ally, North Korea–to a place of no return.

And in the United States, Pauline Green, the country’s first woman president, navigates terrorist attacks, illegal arms trading, and the smear campaigns of her blustering political opponent with careful and deft diplomacy. She will do everything in her power to avoid starting an unnecessary war. But when one act of aggression leads to another, the most powerful countries in the world are caught in a complex web of alliances they can’t escape. And once all the sinister pieces are in place, can anyone–even those with the best of intentions and most elite skills–stop the inevitable?

Never is an extraordinary thriller, full of heroines and villains, false prophets and elite warriors, jaded politicians and opportunistic revolutionaries. It brims with cautionary wisdom for our times, and a delivers a visceral, heart-pounding read that transports readers to the brink of the unimaginable.

Well damn, now this sounds like it is going to be a pretty awesome read.  Follett clearly has an epic story set up for Never, and I love the idea of a world-spanning thriller that will show the various players in a major international crisis as they respond to a dangerous situation.  There are so many cool and intriguing elements contained within the above synopsis, and I really like the great spread of characters that Follett is going to include in this narrative, from the spies in the Sahara, the young up-and-comer in China and the President of the United States.  This is clearly going to result in a comprehensive and powerful character driven story, and I cannot wait to see what unique and captivating journeys each of these protagonists go on.  I am also extremely curious about the world-changing crisis hinted at in the synopsis, which I am taking to be some version of World War III, and I look forward to seeing the full extent of Follett’s vision of world chaos.  I have a feeling this is going to feel very realistic and be based strongly on current world politics, which will hopefully result in a very fascinating story.  All of the above sounds extremely amazing, and I cannot wait to see what clever story Follett has come up with for his next book.

I am always certain to read and enjoy a new Follett book, however, after seeing the above exciting plot synopsis, I have to say that I am now especially keen to check out Never.  I absolutely loved the sound of the fantastic story Follett has come up with for this book, and based on my prior experience of Follett’s exceptional writing I know he is going to create something very special out of these cool ideas.  As a result, I am exceedingly confident that Never is going to be one of the most impressive and incredible releases of 2021, and I cannot wait to check it out later this year.

10 thoughts on “Waiting on Wednesday – Never by Ken Follett”